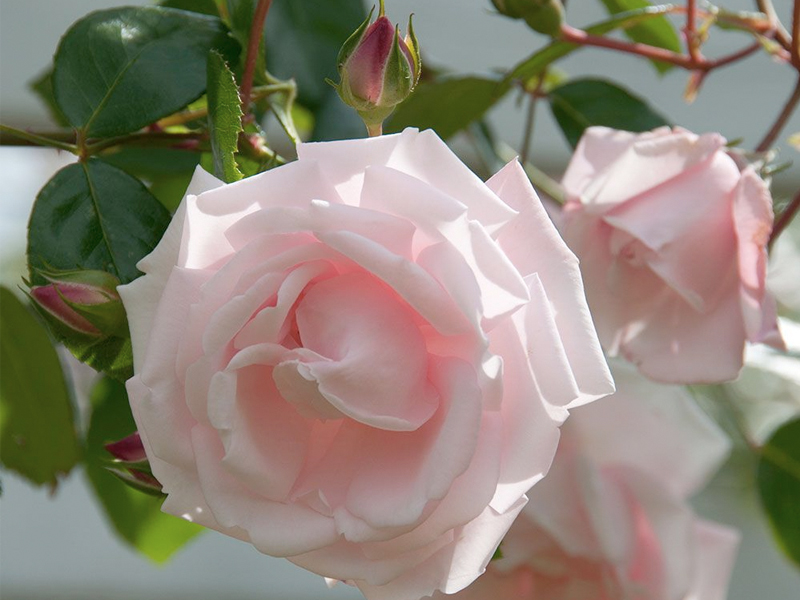 New Dawn climbing roses can grow up to 18 feet, and are often trained to grow up tree trunks. Shiny leather shoes that withstand rain are available thanks to Englishman Edmund Prior, who filed a 1799 patent on the process, and “patent leather” has been with us ever since. Jonas Salk generously chose not to patent his polio vaccine for the greater good of humanity, even though it is estimated he would have earned over $7 billion from it. Even fire hydrants are patented, with the first fire hydrant patent going back to 1801.

Plants can have patents too, with the very first U.S. plant patent awarded in 1930 to New Dawn climbing rose. Today it is the most popular rose in the world, according to the 11th World Convention of Rose Societies. New Dawn climbing roses can grow up to 18 feet, and are often trained to grow up tree trunks and into the canopy. This rose blooms all summer with three-inch, silvery-pink, fragrant double flowers that bloom in clusters. They fade to a soft pink as they age.

The flowers are set off by deep-green leaves. The blossoms begin appearing in late spring and bloom repeatedly throughout the summer.

New Dawn rose has a sweet, fruity fragrance. As a climber it can be trained to grow on a trellis, but also does well planted along walls, on a pillar or an open pergola. To grow it as a shrub, simply prune it harder. It is hardy in USDA Zones 5-9.

Plant bare-root New Dawn climbing roses in early spring, or potted bushes anytime up until frost. Bare-root roses establish themselves best when day temperatures are below 70 degrees Fahrenheit. Choose a spot that gets full sun. Roses grow best in soil with a pH of 5.5 to 7.0. Dig the planting holes deep and wide enough that you can spread the roots without bending them. Most roses are grafted onto hardy rootstock, so be sure that the graft union, which is the large knob on the stem below the canes, is at least one inch above the soil level.

Climbing roses do not have tendrils that let them cling to structures, and they can’t coil around supports like vines, so you have to guide the canes and attach them to the trellis or pergola. Use expandable ties such as pieces of nylon hose to hold the canes in place. If you lay the canes horizontally along a wall or fence, New Dawn will burst into bloom all along the canes.

From early spring until late autumn, when roses are vigorously growing, they will need about an inch of water every week. If it doesn’t rain, then give each bush about four gallons of water once a week. Mulch with wood chips, straw or grass clippings around the base of the rose to keep the soil moist and cool. New Dawn climbing roses are heavy feeders, so use a good organic slow-release fertilizer once a month during the growing season.