‘Heart-wrenching’: Canadian flower farmers forced to throw out months of work amid pandemic 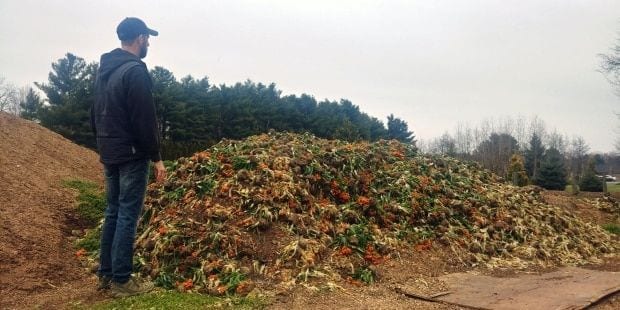 After non-essential businesses were closed across Canada in March due to the pandemic, adjustments to allow garden centres to open were made in Alberta, B.C. , Manitoba and Quebec — but not all provinces have followed suit, leaving some in the flower business struggling.

Farmer Jan Van Zanten says he’ll be lucky to sell just 30 per cent of his main spring crop; the rest he’s either giving away or tossing out.

Van Zanten and his employees planted ornithogalum, also known as sun stars, back in September. There is a three- to four-week window to sell them in the spring. After that, the flowers’ blooms are too open to sell.

He sells most of his flowers to greenhouses, which then combine and distribute them as part of bigger orders.

A drastic drop in demand at this critical time for Van Zanten means he may not earn enough to keep the family business alive next year.

“If nothing changes, then I don’t know where I’ll be, but I won’t be here,” said Van Zanten. Submitted by Jan Van Zanten On Saturday, Ontario announced it would be allowing community gardens and allotment gardens to operate in the province, calling them “an essential source of fresh food for some individuals and families, including those who face food insecurity.”

“Local medical officers of health will provide advice, recommendation and instructions that the gardens must meet in order to operate, such as physical distancing, and cleaning and disinfecting commonly used equipment and surfaces,” the province said in a news release.

The update doesn’t apply to retail garden centres, a Ministry of Agriculture spokesperson told CBC News on Saturday. However, late last week Ontario Premier Doug Ford said that the sector should expect some good news in a day or two.

“I understand the situation they’re in, and our government’s going to act on that,” said Ford, but so far there have been no details released on what the province is planning.

When dealing in perishable products such as flowers, any delays or disruptions can be costly.”We’re very concerned that without help we may see many flower farmers lose their businesses,” said Andrew Morse, the executive director of Flowers Canada Growers, a floral industry trade association. WATCH | Swiss find workaround to get gardening supplies in time of COVID-19 The associations says a lack of clarity over which businesses are and are not essential has resulted in fewer places to sell flowers, and some the essential businesses that have remained open have reduced their purchases.”Garden centres are a key piece of the puzzle in selling flowers, and their status in Ontario specifically means that many businesses […]