King of the greenhouse 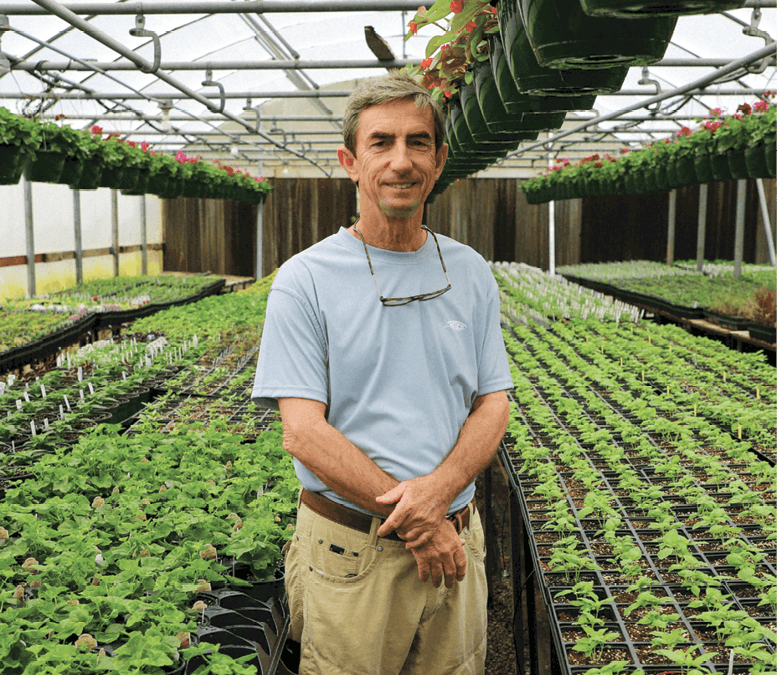 Photos by Laura Hoefer If Tim and Lisa King aren’t working at Forest Lake Greenhouses, the husband and wife horticulturalists are probably tending to their home garden in Florence, South Carolina. Their shared love of plants brought them together more than 30 years ago, and continues to drive their business today.

Tim, a Florence native, took a horticulture class at the local career center during his junior year of high school. When a nearby nursery was looking for part-time help, the instructor recommended Tim — landing him his first job in the greenhouse industry.

He continued working there at the nursery for a year after graduating, and then moved to a large wholesale grower in Charleston. Meanwhile, Lisa migrated to the same company after graduating from Penn State with a horticulture degree. She worked in sales, while Tim served as assistant grower. The two plant-lovers met, started dating and married.

“We came back to my hometown with ideas of starting our own business,” Tim says, “and we never looked back.”

Named after a nearby lake, Forest Lake Greenhouses took shape on the corner of a former cornfield in the summer of 1989. The Kings built two Quonset greenhouses and planted their first poinsettia crop — but less than three months later, Hurricane Hugo whipped through the coast as a Category 4 storm with wind speeds topping 140 mph.

“We just tied ropes over the greenhouse to try to keep the plastic on,” Tim says. “Luckily, we didn’t have any damage, so everything was fine. We grew that first crop of poinsettias — I think it was 2,000 plants — and sold them all that first year.”

After a that stormy start, Forest Lake Greenhouses continued to grow and evolve under the leadership of the Kings. Tim King and his wife, Lisa King Retail growth

The Charleston operation, where Tim and Lisa met, mostly grew blooming potted plants for the florist industry. They initially adopted the same focus at Forest Lake — but added a small retail store to supplement their wholesale production. As new crops came to the retail market, their business shifted drastically.

“We started out mostly growing potted crops and just servicing flower shops,” Tim says. “Then, vegetative plant material came along in the 90s, introducing a whole different class of plant material for the garden center industry. Learning to grow those crops was totally different from the potted crops I’d been growing, so that’s been a huge shift in production.”

While Forest Lake still grows a lot of potted crops, including hydrangeas and poinsettias, they’re now growing more bulbs and vegetative plants for containers and colorful landscapes, while servicing more garden centers —– including their own.

Since starting out as a predominantly wholesale operation, Forest Lake’s business has shifted to 70% retail and 30% wholesale, with Lisa managing retail operations, while Tim, as head grower, oversees production.

“She tells people [that] the way we’ve survived 30 years is that I stay in the back and she stays in the front,” Tim says, laughing. “But we […]

Source: King of the greenhouse